We created IFH to help filmmakers, screenwriters and film creatives survive and thrive in the film industry. We are honored to help people no matter what stage they are on in their journey.

WHO IS ALEX FERRARI?

THE FILMMAKER THAT STARTED IT ALL

I'm Alex Ferrari. I've been in the film industry for over 25 years and have worked on well over 1000 feature films, shorts, commercials, music videos, network promos, documentaries, and webisodes. My personal films have been screened in 600+ film festivals around the world.

I created Indie Film Hustle to share what I've learned over the years as a writer, director, producer, and post-production/VFX supervisor.  IFH is here to give you the REAL DEAL. The truth on how to make it as a filmmaker in this crazy and sometimes brutal business.

You'll find my approach to the biz a bit raw and real. That's because I care about my fellow artists and filmmakers. I've seen and personally made many missteps over the years and I want to help you avoid making the same costly mistakes.

IFH is part truth bomb, part motivation, and part lick in the butt. Never give up on your dreams...no matter what! Our Mission to Help filmmakers Suceed

7 STEPS TO BECOMING A SUCCESSFUL FILMMAKER

I was tired of seeing my fellow indie filmmakers and artist struggle to make a living doing what they love. I decided to put together a list of steps that every indie filmmaker needs to do in order to thrive in the film business.

Since this website is called Indie Film Hustle the terminology I’ll be using will be aimed at filmmaking or screenwriting but all of these concepts can be applied to any art form.

You can read the entire article and listen to the podcast below. If there's one podcast of mine you listen to this is the one. I break down each step in detail. I use some "colorful" language in this episode but the information is solid. Enjoy! 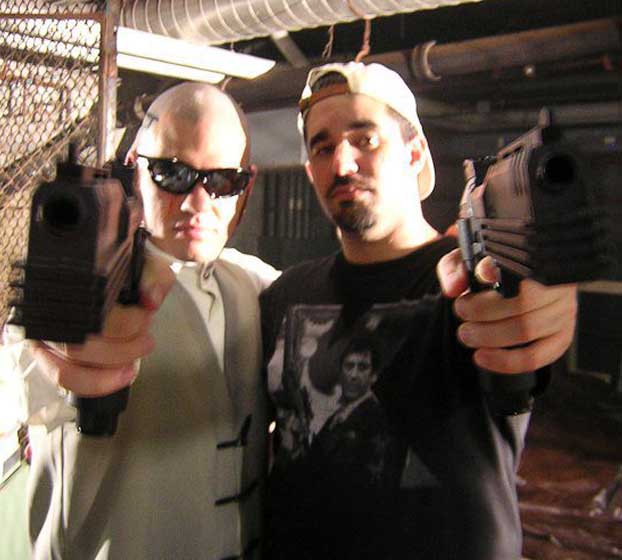 WHY INDIE FILM HUSTLE WAS CREATED

IT ALL STARTED WITH A LITTLE FILM CALLED "BROKEN"

I get asked a lot by industry friends and colleagues "Alex, why do you spend so much time working on IFH when you have projects, films, and other jobs?"

The answer is simple, I love doing it. Ever since I launched the first-ever guerilla film school back in 2005 with the release of my short film BROKEN I got hooked. The BROKEN DVD had over 3 1/2 hours of tutorials on how to shoot an action film on a budget.

It was the first of its kind. There was nothing else like it in the marketplace. I went on to sell over 5000 units of the DVD packing and shipping them from them in my bedroom.

I was humbled by the response from indie filmmakers from around the world. Ever since then I always wanted to continue helping filmmakers and Indie Film Hustle was born. WHAT DRIVES ME TO DO WHAT DO

So many filmmakers are chasing that lottery ticket, that project that will launch their career. IN 2001 I thought that opportunity had landed in my lap. Unfortunately what arrived was not a lottery ticket but a filmmaking experience that molded who I am today. Read below if you dare.

A bipolar gangster, a naive, young film director, and Batman. What could go wrong? Alex Ferrari is a first-time film director who just got hired to direct a $20 million feature film, the only problem is the film is about Jimmy, an egomaniacal gangster who wants the film to be about his life in the mob.

From the backwater towns of Louisiana to the Hollywood Hills, Alex is taken on a crazy misadventure through the world of the mafia and Hollywood.

By the way, did we mention that this story is based on true events?, no, seriously it is.

Where Filmmakers Comes to Talk

Emmy® Winning Writer and Showrunner
(The Sopranos, The Many Saints of Newark)

Unleash the best filmmaker inside of you

Indie Film Hustle creates the film industry’s best programs in every category of the filmmaking and screenwriting process. Master the tools to write a screenplay, light a scene, produce a film, distribute a film and much more. Learn from some of the best instructors working in the film industry today.

BROWSE ALL OUR COURSES